In the fictional geopolitical context presented by the Brazilian Army, the alleged regime with “proletarian” ideals demands from its opponents the “demarcation of lands” that would originally belong to its territory. According to the narrative, “the non-recognition of this historical right” supposedly caused the IPP to occupy the disputed region.

According to the Army, the “proletarian’s” military onslaught “made the United Nations Security Council end diplomatic negotiations and pass a resolution providing for military intervention”, headed by a “multinational military force aiming to defeat the IPP paramilitary group”. Click here to read the full document in which the geopolitical scenario was based. 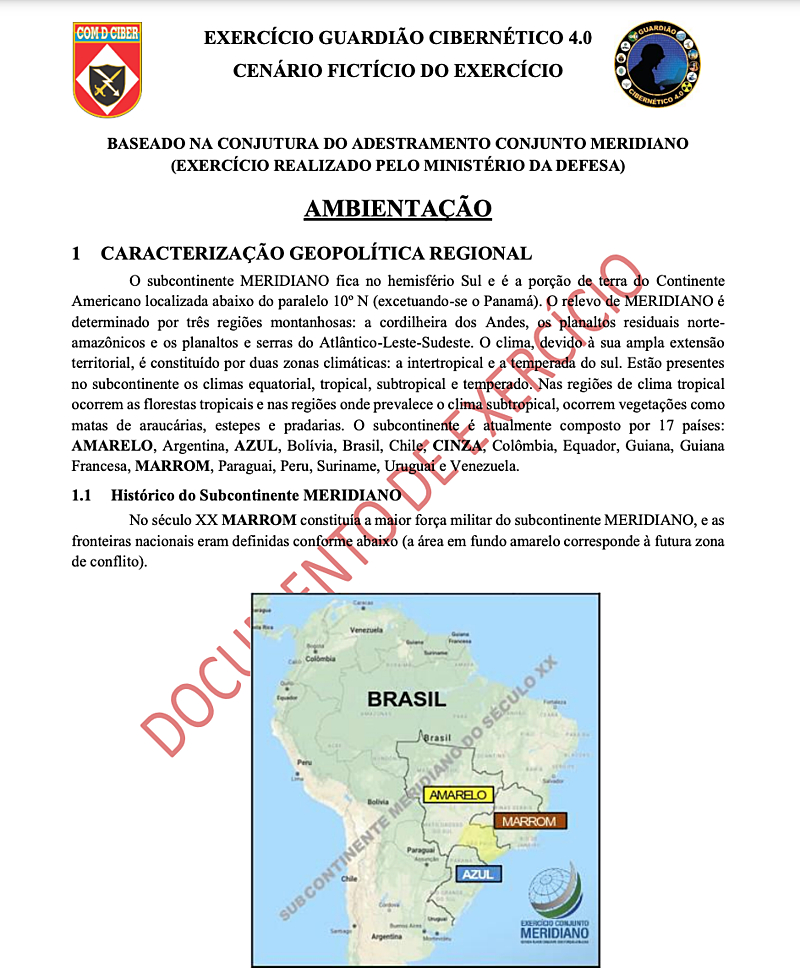 The fictional context created by Brazil’s military was part of the 4th edition of the Cyber Guard, organized every year by the Army to create and present a “realistic environment” in which “participating critical infrastructures need to protect their IT and operating systems from cyberattacks.” The event, which brings together government agencies and companies such as Cisco, Claro, and Kryptus, took place from August 16 to 19.

The simulated war environment with references to leftist ideas as “enemies” was created by the Ministry of Defense for another military exercise, Operation Meridiano, a joint simulation of the Army, Navy, and Air Force, which took place in Pará state, in October 2021.

Another simulation by the Armed Forces, which took place in 2020, was made public by the website The Intercept Brasil at the end of 2021. It intended to fight a “clandestine armed organization” supposedly born from “a dissidence of the Labors’ Party”, or “PO”, in Portuguese, which “recruits and trains MLT militants”, the “Land Struggle Movement [Movimento de Luta pela Terra]”.

At the time, responding via Brazil’s Access to Information Law, the Army said that the exercise that targeted legitimate organizations and left-wing militants had “no political-ideological or national connotations”.

Brasil de Fato tried contacting the Army to check if the names attributed to the fictional organizations were leftist ones. Up to now, there was no answer. We remain open to hearing from them.

Responsible for the military exercise, the Army’s Cyber Defense Command has been, in recent months, in the spotlight of the Brazilian political stage. The sector was represented by General Héber Portella in a commission created by the Supreme Electoral Court (TSE, in Portuguese) to oversee the electoral process. Its representatives insisted on pointing out the supposed risks of the Brazilian voting system.

This year, Brasil de Fato revealed that the Cyber Defense Command was responsible for signing a cooperation agreement with the Israeli cybersecurity company CySource, questioned by the Prosecutor’s Office as “potentially harmful” to the elections.